Sneaker Box Manila opens to the public and can be spotted at G/F  The Promenade Mall , Greenhills, San Juan (Below. the cinemas and YES, the newly opened extension). Been the talk of the town because they have shoes that are rare in the market, legit and imported abroad. Name it, they have major shoe brands like Adidas, Nike, Puma and New Balance.

Well you can actually pre-order if you desire any shoe like Jordans. I noticed how pinoys are into collecting rare Jordans, sorry If I can’t educate you about the different styles of Jordans. I am more of “porma” and not really been a basketball fan. By just asking the friendly and accommodating staff, I guess they can provide and answer your Jordan inquiries. The prices of their Jordans range from P8k PLUS based on what I saw and remembered hopefully. But yeah, It’s worth the investment for the basketball fans out there.

On my area of interest , I am more of the sporty and style side like what I use in the gym and what screams athleisure – Adidas’ Stan Smith (white shoes fad) Nike, New Balance and Stella McCartney.

I am a fan of the designer, Stella McCartney and I love the collection when she had a collaboration with Adidas. Actually, I didn’t know there was a line for Stella McCartney shoes. See, Sneakerboxmanila is updated with the trends.

Yes, Adidas’ Stan Smith designs are available ranging from P7-8 k plus (depending on the model), The Rita Ora’s are not yet available but SOON. I actually have an eye for the gold or rose gold stan smith which I am waiting for. Speaking of Adidas, Sneakerboxmanila was featured on SPOT.PH and known for only having AdidasXStarwars and the glow in the dark ones.

Good news to my followers I will be giving away 2 GCs worth P500 (1 GC per winner) by just following the mechanics  on my intsagram account! 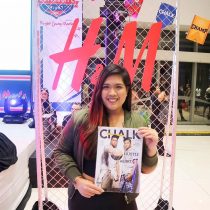 It’s this time of the year where Chalk Magazine brings all schools in the metro representing their designated university and showing the true essence of comradery. These bright young hotties are not only good looking but they are as well model students- that’s why they’ve been chosen in the first place. Each with a different talents and millennial perspectives about how the generation can take over at this present day.

Chalk Magazine in collaboration with H&M- the perfect partner for this event because H&M as a known brand doesn’t fail to set trends that are young and cool, a factor of a bright young Manillenial. H&M are always in trend every season and since they started to branch out here in Manila- considered one of the premier brands  and loved in the country today. 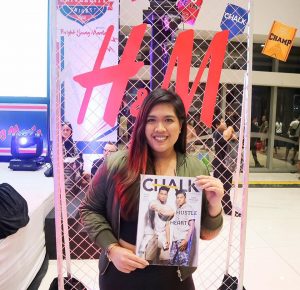 Last night, August 12, 2016,  was the ultimate #TheBigUniversityNight at the H&M Mega Fashion Hall – there were activities, food stops (Jamba juice, Chef Tony’s, Pizza and Bundaberg) and social gatherings (you get to meet new people and make networks). They had a contest among schools on the best OOTDS, the winner was chosen by the Chalk Magazine Team (UST got to bring home the bacon and won worth P20, 000 for their school org) and also a dance competition. A performance from the pambansang pepsquad and champions- UP PEPSQUAD! (University of the Philippines).

Last night also revealed the roster competing for the coveted title of Chalk’s Bright Young Manila Campus Hottie. The event was hosted by DJ Ai Dela Cruz of MYX. The finalists got to be interviewed , showed some of their talents and convince us why they deserve to win. Despite the competition everybody were all in together and just having fun.

Abiel Anselmo, The Bae of trades of DLSU

To vote and to get to know more about these cuties head over to  http://chalkmagazine.abs-cbn.com/vote/ the hashtags #ChalkxHM #ChalkBYMCampusHotties #TheBigUniversityNight 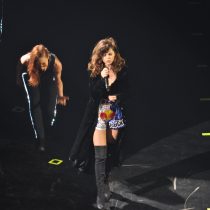 I would like to share tidbits of how awesome Selena Gomez was last night, I couldn’t help it that I wanted to just blog and share the feeling. Well there goes my bucketlist, Selene and Demi (twice already). For so many years as a concert attendee this is the only time I decided to post a blog about it- since during the days I don’t have a blog yet and I was newbee at blogging. I love going to concerts (That’s sounds one of those best places to bring a date haha). 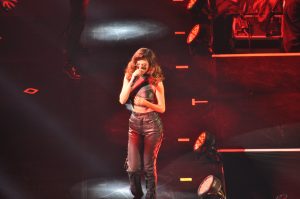 Anyways, Selena was amazing – she bloom from her shy teeny bopper Disney days to like a total performer like Beyonce (Beyoncé is still the queen- hoping to watch her concert). Total performer, she even played a keyboard to one of her songs. Quick story to share: Just a few days I was in Toronto, Beyoncé had a concert at Roger’s Stadium. The tour guide mentioned it to us while we were riding a boat viewing the skyline.- Thanks a lot wished I knew and came earlier. That should be next time my itinerary when I visit international waters check for any events and concerts. Too bad my friend asked me to watch DNCE but we went uphill to camp – but I love being in one with  nature something seldom I do in Manila. 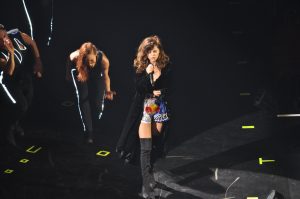 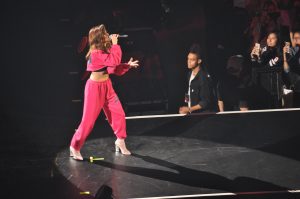 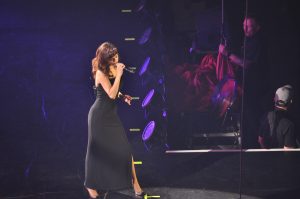 Anyways, I love every wardrobe she wore at the concert- very edgy and chic. Pieces styled by Sami Miro who came on tour with her. Well I think she had 5 outfit changes in total. My fave looks were the one she wore a robe with a black top and matchy boxing shorts with knee-high-heeled boots next would be she wore this athleisure getup with a hoodie- the girl has abs. Then the classic slit black dress.

She slayed every song and gladly most of the songs she played ones I knew! Like Come and Get It, Revival, Kill Em With Kindness, Same Old Love,  I want you to know, Hands to Myself- current fave, Who says- fave song since I was in college. The concert run for an hour and a half- it was awesome. Looking forward to my other concert happenings and hopefully I can post them. 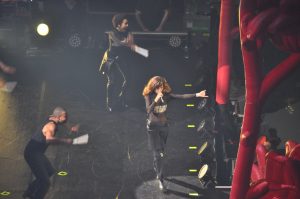 Before the concert – As usual the concert didn’t start on time – what’s new. Tips: bring a Powerbank or anything that could entertain you while waiting. You can eat inside while waiting too since food and drinks coming from outside is prohibited. Darren Espanto was the front act- been seeing this kid all the time to every event I go to, kid with talent that’s why my parents were rooting for him when he was starting at The Voice Kids.

People would ask me is it fun to go to concerts alone or with someone. Well I can’t say which is much better because both has pros and cons – depends on your perspective. If you are alone, yeah you are lonely but there are other concert goers that go alone too and maybe you can make friends, have the guts to introduce to yourself (but not all your complete information maybe you can talk about the artist and some knowledge you know – it’s better to be safe and you just met the person). Once the concert starts people start to do their own thing while watching. If you go with someone, yes you have someone to talk too and take pictures of you- definitely have a good time.

How about you guys? Any concert experiences and tips? 🙂